The Ant and the Aardvark

The challenge was to pick a word at random from the dictionary and do something relating to that word. Dani's dictionary, however, had a lengthy introduction and language section at the start, so it fell open at the very first page, and the word she found herself pointing at was 'Aardvark'. So we went to London Zoo to view the newly acquired aardvarks there. Named Kiyo and Misha, they were born in different zoos, but have become inseparable. They are beautiful animals, and I recommend going to see them. After our visit, we got on to the subject of The Ant and the Aardvark.

Memories of obscure children's TV programmes will always bring people together, because they carry such potent emotional content in an innocuous form and because, in the UK especially, many people study or work a long way from where they were raised as children. We may have very different upbringings, but certain small things unite us. And it is these minor experiences that affect us most deeply, because they sneak up on us. Part of growing up means consciously laying the ghosts of childhood to rest. Strong memories, both negative and positive, are processed and turned into aspects of our adult personalities, but we neglect to come to terms with daft trivial things, and their evocative power carries the unnerving, uncanny quality of wistful, even raw, nostalgia. This quality is intensified by its apparent inscrutability. (In fifty years time, Rebecca Black's 'Friday' will send chills down people's spines and bring tears to their eyes in a manner quite different to the way it does today. They will cherish its naïve charm and wonder how the art of simple song writing was lost.)


The Ant and the Aardvark was a footnote in the history of children's animation even when it was first broadcast. It began life merely as an entr'acte in The Pink Panther Show, acting as an undemanding interval piece in a programme that was not itself excessively highbrow. Only fifteen episodes were made, between 1969 and 1971, shamelessly borrowing plotlines and tropes from Warner Bros and MGM cartoons, while cheerfully dispensing with high artistic production values. On rewatching the show on YouTube, my attention was drawn especially to that unmistakable non-naturalistic soundscape underneath: the pops, boings and whistles that have constituted the aural lexicon of modern cartoons ever since. Creeping up on someone is indicated by high-pitched xylophone semiquavers; dashing off in a hurry, by a bullet ricochet; a lump on the head emerges to the sound of a balloon being scraped. But more striking still were the voices. The (unnamed) Aardvark is voiced as Jackie Mason and the Ant (named Charlie) is voiced as Dean Martin. Jackie Mason and Dean Martin? I would never have picked up on the reference when I was little, but both voices have an inbuilt recognizability that works remarkably well. It is the American impressionist John Byner (1938–) whom we have to thank for these voices and for creating such an unusual yet engaging double act. (You wouldn't normally associate Martin and Mason with each other, but there is a clip available of Jackie Mason appearing on The Dean Martin Show in 1966. Sadly they don't appear on screen together, so it's not quite possible to shut your eyes and imagine an episode of The Ant and the Aardvark.)

Dani remembers the same show from her childhood. When dubbed into German, a female voice was used for the aardvark, who was named Elise. This seemed almost inconceivable to me – such a bizarre counter-intuitive choice that it bordered on the heretical. But there is always genius behind bold choices, and I have been rewatching all the episodes of The Ant and the Aardvark in German in order to retrain my ear to appreciate what amounts to an entirely different show. You know what? It's better in German. Despite the fact that I can't understand a word of the language, there's something distinctly funnier about the blue hairy punching bag being played as a middle aged woman. So successful was this reinterpretation of the concept, that the the German title of the show – Die blaue Elise ('Blue Elise') – indicates the aardvark as the protagonist, and Charlie the ant isn't credited at all. The actor behind Elise's brilliantly deadpan delivery was Marianne Wischmann (1921–2008), who later became more famous for providing the voice for the German Miss Piggy in Die Muppet Show. As with John Byner's interpretation, the aardvark's voice was recognizable, but in Wischmann's case the recognition became applied retroactively.

The Ant and the Aardvark, in both its English and German versions, is a below-average cartoon improved vastly by its talented voice actors. It is those voices and their uncanny associations that follow us into adulthood, and we can be sure that nostalgia for absurd and trivial things will continue its ridiculous, clumsy pursuit of us into later life as relentlessly as Elise/Aardvark* will maintain his or her chase after that complacent ant. And speed will not not assist our escape so much as cunning.

* The male and female versions of this character, born in different countries, deserve to be reunited, as Kiyo and Misha were.
Posted by Michael Brunström at 19:17 0 comments

I owe the numerous loyal readers of this blog a long and detailed essay on the subject of Fantômas, one of the most extraordinary literary creations of all time, and one of my all-time enthusiasms.

But in a vague attempt – uncharacteristic of me – to be topical, I'd like to approach my subject backwards and first present this extract from a little book published in 2002 to coincide with a Fantômas exhibition at the Pompidou Centre (which I visited, of course). The references – which are in any case mainly to the dismal (in my opinion) 1960s spoof movie versions – will be over the heads of most non-devotees, but it's still quite interesting.

The book is called Fantômas, style moderne and it is written by Philippe Azoury and Jean-Marc Lalanne. On the back cover, they describe themselves as follows: 'Neither Juve nor Fandor, but rather a Heckle-and-Jeckle combo, and despite having published articles and fakes in Libération, les Cahiers du cinéma, Max, les Inrockuptibles, Trafic, Idol, Cinergon, Rebel, 1895, Cinémathèque, HK, Art Press, Philatélie Madame . . . Philippe-Azoury-Jean-Marc-Lalanne does not exist. What about you?'


(I'd like to point out that this biog, and the extract that follows, were both translated by me from the French. That's why it's clunky in places.)

Is it possible that Osama bin Laden watched the Feuillade, Jean Sacha or André Hunebelle films? Is Fantômas so pervasive in the global collective unconscious that even those most contemptuous of Western culture could have inadvertently adopted all its archetypes? If you watch the video recordings periodically released by the Saudi warrior, it seems as if Fantômas has suddenly re-emerged from the fictional realm that created him. The eternal fugitive, the real-life Elusive (as of 3 March 2002 he is still missing), Bin Laden has a dizzying number of similarities with the fictional baddie. Like him, he conceals himself behind a carefully constructed image, addresses the whole of Humanity, invades the whole world’s screens at once, scrutinizes his audience through the camera’s lens and speaks to us from a mysterious secret cave (though his probably less trendy than Hunebelle’s).

There is, however, a point at which the two part company. Hunebelle’s Fantômas, contemporaneous with the rise of television, is intoxicated by its power to be everywhere at once. Through television, he can realise his former dream of complete ubiquity. His voice is deployed from a single point and disseminated through countless outlets, which listen as he speaks. It’s an Orwellian dream, and it is already outmoded. If Bin Laden’s videos have been effective, if the power of their utterances is at all surprising, it is precisely because they comprehensively demolish the myth that the visual impact of television depends wholly on the simultaneity between broadcaster and viewer. What did we see in that first video, sent ‘by courier’ by Osama bin Laden to the Al Jazeera headquarters on 7 October 2001? A rocky landscape leading to three men sitting cross-legged in the cold light. The group’s naturalism (reminiscent of Straub and von Stroheim), the pure calm of the phrasing, and the stony-faced inscrutability of the three figures: all combine to create an astonishing effect. Yet this complex effect owes nothing to the constant ‘live’ nature of cable news and other modern media. Broadcast on Al Jazeera’s evening news to the exclusion of every other programme, the tape cut clean through the usual raft of ‘live’ images (bombs over Kabul, opinions, debates, cross-cutting of footage). That very night, this makeshift VHS recording created a prophet, surrounded by a divine halo, which because of his golden tower, or phosphorescent cave, was by nature untouchable. Suddenly, the deferred became more vibrant than the direct, and all the ‘live’ images and on-the-spot real-time reports became obsolete, late for something that had already happened, which had been strategically carried out and preplanned with care, and which would happen a second time every time it was rebroadcast. ‘The image will come at the time of resurrection’, said Godard, paraphrasing the Bible in his Histoire(s) du Cinéma. Bin Laden not only organised 11 September, the most horrific and traumatising ‘live’ event in the history of mankind and images. He also subverted – with appalling cynicism – every principle of modern communication founded on the cult of continuous connection to the event. In its place he substituted the iconic aura of the prerecorded, the era of cinema (or even the era of the image) rather than that of the now redundant modern media. 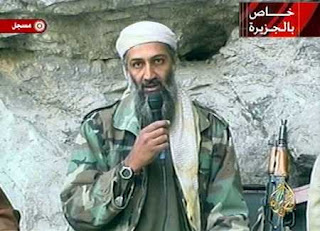 How far can we push this idea of Fantômas reincarnated as Osama bin Laden? There are some further amusing coincidences. Reread, for example, the conclusion of an article ‘The Pure Poetry of Fantômas’ by Alexandre Vialatte, published in La Montagne in November 1961: ‘We shouldn’t be surprised to see Mme Toulouche, at the age of 70, sneaking aboard a luxury liner in order to kill American detectives. By biting them. Undetected. Allah is great.’

Posted by Michael Brunström at 11:39 0 comments