My Shelves, My Selves

On Friday night, I was interviewed by John Fleming for his blog. Among the topics we discussed was how sad it was that such a talented, eclectic and erudite man as Jeremy Beadle became so castigated as a result of Beadle's About. (Inexcusable pun: using Beadle as your go-to 'figure of hate' is a despicable shorthand.) Fleming had known Beadle personally, and mentioned the extension that he had built on to his house to contain the library he used while working as London Editor of The People's Almanac.

Yesterday, the morning after my meeting with Fleming, I was doing my own book reorganization. A large number of them had been removed from our living room while we redecorated. It was time to put them back in again.

I'm old enough now to perceive the limits of my book acquisition. I buy many fewer books now than I did in my late teens and early twenties, a time when it was impossible to order up rare books from the Internet. Many of my most precious books were excavated from damp labyrinths underneath the Charing Cross Road, which I would explore speculatively on a frequent basis. Unless I become suddenly wealthy and change my reading and living habits, I'm unlikely to need miles of additional shelf-space. It is not inconceivable that, within my lifetime, many new books – especially those of obscure subject matter – will never see ink or paper, and that most of the books in my collection will be digitized, and could be retrieved on my phone with a few taps.

The more books that are hoarded, however, the less likely it it becomes that any particular book will ever be consulted again. So they sit on the shelf and get dusty. When you move house, they get piled into heavy boxes and them emptied out again. So they've been treated like pure clutter and moved out of their previous free-standing bookshelves (low-level, easy-to-reach, taking up floor space) and archived away onto high-level purpose-built wall shelves. Why not simply get rid of them?

That would be unthinkable. They're one of the very few things that I'm proud of. Of course, I've plenty of Queneau, Perec, Cocteau, Vian, Roussel, etc.. But I also have the 32 volumes of Fantômas, plus several very rare editions of the Allain-era sequels (and the exceptional L'Encyclopedie de Fantômas, which deserves an blog entry all to itself). I've a tatty copy of Ubu Roi signed by Stanley Chapman with a gidouille sketch. I've scuffed early editions, published by Calder Boyers, of all of Ionesco's plays, and lots of René de Obaldia and Fernando Arrabal, Robert Pinget, etc. And quite a lot of Blaise Cendrars and Gustave Le Rouge, and countless tiny nrf 'Le Livre de Poche' editions of French poetry which is unlikely ever to be translated, and which I'll never get round to reading. (And naturally, I own the three volumes of The People's Almanac and related publications.)

Each one carries with it a journey that I once took, hidden away between the covers. The experiences and significances inside them shine brightly with myriad iridescent refractions and personal reflections. They're not much to look at, but they are more precious to me than diamonds. Nonetheless, it is impossible not to contemplate the imperceptible, slow change in my relationship with my books. They are on display, but out of the way, like a rusting ploughshare nailed to the wall of a country pub. With every day that passes they become less like the tools I use in my life and more like an ossified memorial of it. My books give me an overwhelmingly delightful melancholy and a tragic joy.

Casual visitors to Highgate Cemetery often react with surprise when they stumble upon Jeremy Beadle's moving gravestone. (They should put a hidden camera there.) 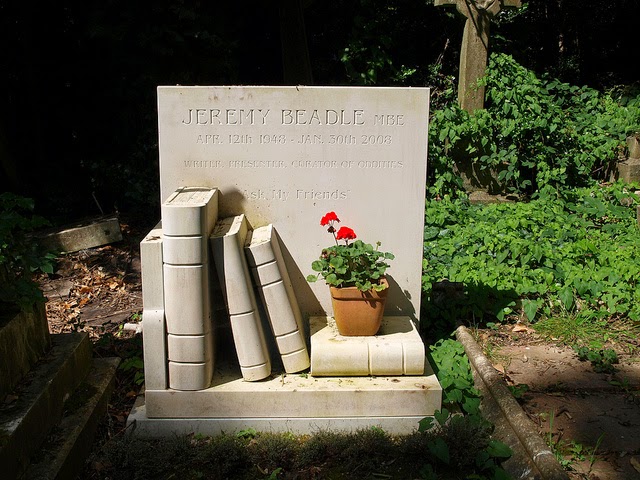 P. S. As a result of several emotional and physical upheavals in the last few years, my books have become horrible muddled, and it is time to set about the massive task of organizing them – which will be an existential self-organization. There's plenty that has been written on this topic, in particular a great article by Perec in Species of Spaces, a book which, ironically, I'm currently unable to find.
Posted by Michael Brunström at 09:48 0 comments