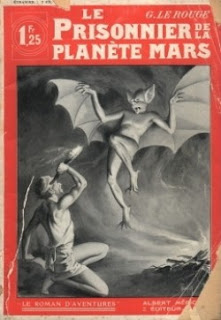 I've mentioned briefly before my passion for French feuilleton fiction of the early twentieth century, which was aroused principally by Fantômas, the epic crime soap opera novel (arguably the longest novel ever written), written between 1911 and 1913 at a rate of one volume per month, non-stop for thirty-two months, by Marcel Allain and Pierre Souvestre. I'm proud to say I've read the whole thing in French.

Sadly, my activities these days don't allow so much time for reading avant garde French pulp fiction. Some years ago, I made a start on translating Gustave le Rouge's sci-fi horror novel Prisoner of Mars and its equally bonkers sequel, War of the Vampires, into English, and the promises to myself that I'll finish the job have become an annual fixture. Finally, however, someone else has done it for me, somebody a lot more competent and qualified: Brian M. Stableford, who is both an expert on and a prolific exponent of the genre.

I'd like to quote to you from his fascinating introduction, which I hope gives a flavour of the environment in which these books were produced.

Alexandre Dumas, one of the great pioneers of feuilleton fiction, had set a very conspicuous example in his amazing productivity and his distinctive methods of composition, which routinely involved collaborators. These collaborators sometimes did his background research for him and produced rough drafts for him to expand and polish, but their primary duty was to serve as amanuenses. To a great extent – no one is sure how great is was, because the authors were routinely secretive about it – feuilleton fiction was not so much written as dictated, and the duties fulfilled by the dictation-takers often went beyond mere copying to various kinds of embellishment. Productivity became a matter of pride to many feuilletonists, as did speed of composition; Second Empire writers like Paul Féval and Ponson du Terrail openly competed in the matter of how many daily serials they could compose simultaneously, and Ponson not only thought very highly of himself for being able to do five at a time but boasted that he had got them done in time for lunch, so that he could spend the afternoon doing more interesting things. (His amanuenses, if he used one – he never admitted it – presumably could not.)

By the time Le Rouge got into the act, the art – or craft – of fast composition had been perfected by Marcel Allain and Pierre Souvestre, the creators of Fantômas, who produced books in ten days flat, spending the first three on planning an outline, the next three dictating and the final four correcting the typescripts. (The invention of the typewriter, including an automatic double-spacing level, had made it easier for shorthand typists to produce easily-correctable copy for their bosses to look over.) Allain and Souvestre were, however, regarded as perfectionists by some of their contemporaries, who thought that outlining and second drafts were for wimps and took a perverse pride in never planning or revising anything. It was not so much that they were proud of being slapdash, but they were sufficiently laid-back not to care about such minor matters as leaving plot-ends hanging loose and vital questions unsettled.


While some of these authors appear to be arrogant hacks of the worst order, their collaborative approach to creativity is pretty liberating. It is a world away from the image of the tortured artist alone in his candle-lit garrett plucking honed expression from his strained heartstrings. It is more like Michelangelo doing the Sistine Chapel with his team, doing the layouts and the faces, and letting the students fill in the drapery and backgrounds. I personally find this style of work hugely exciting. It's not 'slapdash'; it's spontaneous and full of life.
Posted by Michael Brunström at 11:41 0 comments

I spend more time in Angel these days. In the ticket hall of the Tube, there's one of those whiteboards containing a daily witticism – a piece of cod wisdom or popcorn irony that normally makes me groan. 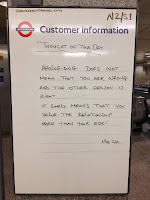 In recent weeks I've been allowing myself to get increasingly angry about these mottoes. It's not their triteness that upsets me; it's the cynicism of the exercise. They're dishonestly designed to give the impression that in some back-office of Angel Tube sits an eccentric, moustached and rubicund Station Master behind a mahogany desk, his study lined with leather-bound books of poetry and framed photographs of steam locomotives. In the corner, a gramophone plays Elgar. Tapping out his pipe, and gazing wistfully at the specks of dust dancing in the morning sunlight, he reaches for his fountain pen and chooses the day's memorable morsel of philosophical wisdom, before giving the brass buttons of his uniform a polish.

But surely these daily sayings are in fact emailed in from from some centralised and overbudgeted TfL marketing department, who have cut-and-pasted them from some crappy Facebook group riddled with kitten photos, then pre-vetted them for customer appropriateness according to a set of satisfaction-quotient criteria. They're then soullessly copied out every day, complete with spelling errors and bad punctuation, by one of the cleaners.

As it turns out, neither of these scenarios is entirely true. For I was rather pleased to stumble across the Thoughts of Angel website, which carries this prominent disclaimer.

And there are details of recent charity fundraising efforts by the station staff, and a few other bits of local news. It's scanty so far, but apparently genuine. And I cannot find fault with creating 'a link between the daily commuters and members of staff'.
Posted by Michael Brunström at 12:59 0 comments