I have a fascination with voice actors. The other day it occurred to me that Gargamel in the original Smurfs TV series sounded a lot like Dick Dastardly. A Google search cleared this up simply. Yes, it turns out, the two characters were both voiced by Paul Winchell. On discovering Winchell's Wikipedia page, however, I was blown away.

His primary achievement was as a ventriloquist, working with Jerry Mahoney and Knucklehead Smiff. Here's an episode of one of his live TV shows from 1955, heavily sponsored by Tootsie Rolls.


It's worth watching the whole show. For example, at 17:13, Knucklehead Smiff sings a song explaining the workings of the human eye. By 22:40, Jerry Mahoney has apparently run away from home, and Winchell is in tears.

In addition to his ventriloquism and voice acting work (most famously as Tigger in Disney's Winnie-the-Pooh animations), Paul Winchell made studies in acupuncture, medical hypnosis and theology. He was an accomplished painter. He invented an artificial heart – which may have influenced the Jarvik-7 – and a disposable razor blade. He also worked for the Leukemia Society, and promoted a hunger relief scheme in Africa through fish farming. Yet there appears also to have been a darker side to his life, including personal battles with abuse as a child, depression and mental illness.

Paul Winchell's autobiography, Winch, was published in 2004, the year before his death, and clearly he used it to settle a few scores. Good luck finding a copy. It is not in the British Library. Indeed, there appear to be no copies in the United Kingdom. The cheapest copy available I can find on Amazon is £175. Was the book withdrawn, pulped even, following legal wranglings over its content? There exists this thread, on a magicians' forum, for people who wonder how Winch may be obtained, including contributions from individuals who claim to have read it. 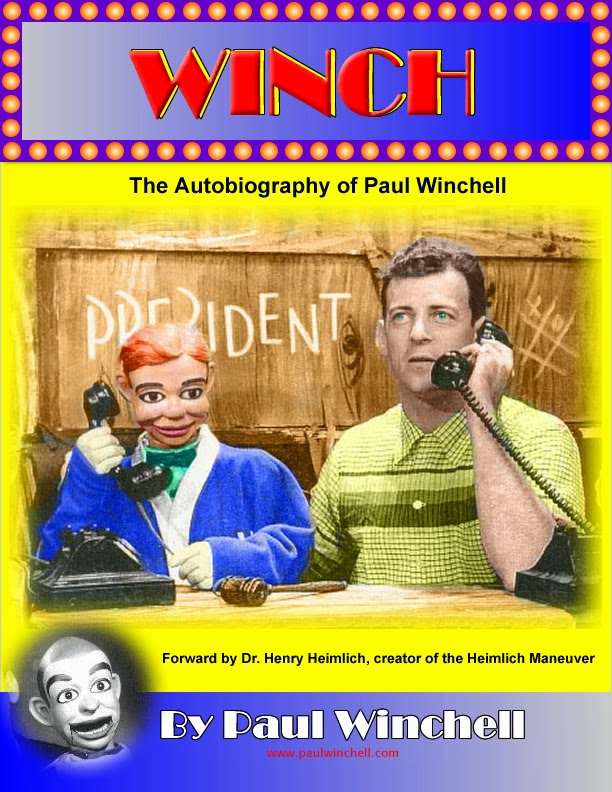 The only scrap of Winch I have so far managed to salvage is the lurid cover, including "Foreword by Dr Henry Heimlich, creator of the Heimlich Maneuver", and this press release from the book's publisher. I joyfully quote it in full. Every paragraph is jaw-dropping.

After many years of waiting, fans of legendary ventriloquist, Paul Winchell, can now learn the real, life story of one of the more unusual television performers of our time, the amazing Paul Winchell. Far more than a ventriloquist and television performer, Paul Winchell'’s life is hard to contain even in, WINCH, his 400 page autobiography, because, unlike most people in this strange planet, Paul Winchell dared to be himself. And by daring to follow his own golden thread of truth, Paul Winchell, like the legendary Ariadne, met the Minotaur, his own monster within. This true story is a tale, which transcends even his meteoric rise to fame and fortune as one of the leading television entertainers of the 50's and the 60's and many other facets of his amazing life.

As Winchell proclaims on the dust jacket, on the back of WINCH's bright and inviting cover, with the pictures famous ventriloquist and his dummies in his television studio: "Let me warn you at the outset, this is not a typical Hollywood memoir. In a way, it is a ghost story, written by a person who lived in two completely different worlds. Publicly, I lived in a world of glitter and celebrity. Privately, I lived in a world dominated by a ghostly apparition, elevated to deific proportions. In this secret world, I made an excruciatingly difficult odyssey towards self-knowledge."

Both the glitter and the nightmare of his life are relentlessly tracked in a book, which sometimes reads like Horatio Alger and sometimes like Stephen King. In fact, most of his fans will be shocked to learn of the Paul Winchell who had a private life outside of the limelight, whose true life was so different than that of the public Paul. Winchell. Although many celebrities have written books that brush the cobwebs under the table, Paul Winchell does not. In WINCH, Paul Winchell mercilessly chronicles the private war he fought against the darkness within himself.

During the 1930's, a kid from Coney Island is struck by the art of Edgar Bergen, a ventriloquist who has soared to fame on a radio show, the Chase and Sanborn hour. Bergen, through his writings and performances becomes the mentor that launches young Winchell on his career. Eventually, Winch becomes to television what Bergen was to radio, climbing through the world of radio and Big Bands. Still, the death of his mother, Clara, who he both loved and feared, an unhappy marriage and torrid love affair ignite the latent psychological problems within. Winch, despite his great success, lives in a supernatural world, assailed by an apparition, who assumes monstrous, almost deific proportions.

Eventually, this interior world turned upside down, overtakes the real world. His fight to exorcise his demons continues, as he develops numerous prime time TV shows and children's shows, which dominate the airwaves for more than two decades. Although partially drowning in a world of unspeakable fear and supernatural horror, he studies psychology, religion, mythology and, medical hypnosis. Unwilling to be imprisoned by his second life, he continues his productive work in entertainment and even undertakes many creative enterprises, including the thrilling invention of artificial heart, courageous projects for someone consumed by a secret terrifying nightmare.

From the crude supernaturalism of his own mother, Clara Wilchin, a woman obsessed with hellfire and damnation to the friendship and suave showmanship of mentor, Edgar Bergen; from the powerful friendship of Ed Sullivan which helped him achieve national notoriety to the uncaring contempt of the wife of an early marriage, from the fierce seductiveness of his Latin mistress, Rosetta Solares to the cruel indifference of Frank Sinatra; from his friendly competitor, Ronald Reagan, who he beat in a national soap box race to the unquenchable loyalty of Major Bowes, his first sponsor and lifelong friend – WINCH is filled to the brim with unforgettable characters and alliances, some powerful friendships and some terrifying betrayals.

The book, which has also spawned a screenplay, is part of a larger plan of Paul Winchell's to not only tell the story of his life in this one book, but to develop a series of books and films that will renew, revitalize and project many of his old characters into a new twenty-first century format. "“To this end, as I have stated in my introduction, I have somewhat fictionalized my story - partly to protect certain identities. I hope that there are those who have been abused in this way that will profit from my story and perhaps there are those who will re-examine their relationships to present and future children on the basis of this narrative.

"Although this is an adult book – and, believe me, it is nothing but an adult book – it is my belief that this book will enable me to rekindle some of my old shows and reformulate my new approach to children'’s broadcasting. I am attempting to recapture some of my own fans and audience as a prelude to a massive attempt to change the nature of children's broadcasting, not by talking about it, but by doing it. At this very moment, we are beta testing PAUL WINCHELL'S KIDS'’ NETWORK, a worldwide streaming children's website, which will initially feature my vintage shows and some other very recognizable shows. Within the children's network, we are developing an animation team that will do some in-house work, but also work on a major cartoon series, featuring my old characters in a new light."”

"I cannot emphasize enough, however, that this book is a prelude to three other books and films that are a somewhat fanciful retelling of the story I have told in WINCH. Not only is WINCH currently in screenplay form, but I have already invested in a set of screenplays that will form the basis of a science fiction trilogy that I believe will rival Star Wars, Fellowship of the Rings, Back to the Future – and other highly successful franchise efforts. In my case, unlike the others I am speaking of, I have actually practiced before. I would hate to count the number of Hollywood celebrities who played with Jerry Mahoney and Knucklehead Smiff and gave ventriloquism a whirl in their childhoods. You can read about David Copperfield'’s efforts in his introduction to the new edition of my next book, Ventriloquism for Fun and Profit. But people like Robert De Niro, Francis Ford Coppola, Ted Knight, Johnny Carson – even Howard Stern – were all taken by ventriloquism when they were younger- and I daresay the efforts of my franchise and my merchandising made an impression."

I suddenly have only one ambition in my life: GET WINCH!
Posted by Michael Brunström at 12:46 0 comments