The word "etymology" derives from from two Greek words: ἔτῠμον (truth) and λόγος (account). As such, it claims to be far more than a merely linguistic discipline. In its original sense, etymology attempts to get at the truth of an utterance, rather than merely the history of a word.

This is balderdash, of course, but it neatly summarizes the way etymology itself is often misused. We should be more sceptical.

I've been thinking about etymology a lot since listening recently to Alan Watts' lecture on "The Mythology of Hinduism". It's given me much to think about – about philosophy, life, improvisation and much else – albeit in a sketchy, pithy way. It's a large topic, which Watts condenses into bite-sized mental snacking material. Extracts of his recordings have been animated by Tray Parker and Matt Stone, the creators of South Park.

And wow, he sounds amazing. His is one of the truly great voices. It resonates near the peak of an audio podium that I have made for my voice heroes, who include Oliver Postgate, Thurl Ravenscroft, Tim Gudgin and Vivian Stanshall. It is fruitily English, yet wavering, as if his cracked vowels were walking a tightrope between tears of comedy and tragic laughter. It's beguiling and seductive. No wonder he was married three times.

I don't like his rhetorical flourishes, though. They jump out at me, especially his excessive use of etymological examples to clarify the "original" meaning of modern English words. He peppers his simple poetic language with little these over-clever bits of supposed learning, which seem inserted to support his ego rather than his argument. It's a shame that he feels he has to appeal to mundane, spurious and earthly authorities, rather than the unadorned expressiveness of the myths he relates.

Because I like to be positive, I will give him the benefit of the doubt, and assume that his use of etymology is as ironic as he makes it sound. Surely he of all people understands that words and truth are not the same thing. In fact, the pauses, intonation and little chuckles in his voice often carry more truth than the literal meaning of his gnomic, aphoristic witticisms.

That's not to say that etymology is never revealing. The game of tracing a word's history is a fun one – all the more so when its conclusions are absurd –  but playing it to prove a point is as flawed and dangerous an idea as drawing conclusions about a person by tracing their genealogy. If words do have authentic meanings, that authenticity resides in the space that opens up at the moment the word is spoken – and in the shape it makes in the mouth of the speaker – but not in a mummified remnant from an arbitrary past time.

We learn more from learning that the word "tragedy" derives from "goatsong" than from learning that "comedy" comes from "festival song", but there's far more still to be discovered about both words by performing them.
Posted by Michael Brunström at 17:14 0 comments

The Return of the Improvised Greek Tragedy 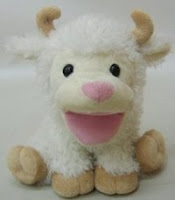 Is it possible to improvise Greek tragedy? Come and learn how.

In this now-famous workshop led by Michael Brunström, a wide range of improvisation techniques are rallied to allow the spontaneous extemporization of Sophoclean drama. Based on the work of poetic geniuses from Aristotle to Zorba, and from Heraclitus to Ken Campbell, this is a dizzying romp through language, stagecraft, narrative, archetypes and high emotions.

At the end of the afternoon we will improvise a complete Greek tragedy.

Numbers are limited, so book early to ensure a place on an improvabout that is guaranteed to be quite unlike anything else you’ve ever done before.

Michael Brunström is a seasoned improviser who has worked with some of the biggest names on the London scene. The creator of Frogspawn, The Spouting Club, The Human Loire and The Curt Hatred Trilogy, he is also known for his original and unconventional improvabouts.
Posted by Michael Brunström at 14:50 0 comments

Following my dad's principle that anything you do twice immediately becomes a tradition, steeped in its own solemn and uncontestable lore, yesterday we did Bleigießen on New Year's Day for the second year running, thus initiating a new annual custom. ('The same procedure as last year, Miss Sophie?' 'The same procedure as every year.') 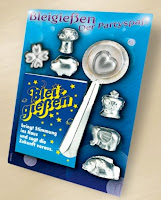 Bleigeißen (lead-pouring) is a German form of molybdomancy practiced at New Year, in which small lead shapes are melted down in a spoon over a flame, then quickly tossed into cold water, where they harden instantly, often into unlikely, surreal shapes. These are analysed by means of the shadows they cast under candle or torch light. These are checked against a list of official interpretations in a booklet provided with the Bleigießen set, although other online lists are available.

Many of the shapes carry the sort of open-ended, generally positive messages that we associate with horoscopes. For example, a bottle-shaped shadow simply indicates 'happy times to come', which is nice, but rather unhelpful. Other shapes are astoundingly specific. A frog says 'You will win the lottery'. You must leap into action if the shadow looks like an eagle owl. This means 'Someone is breaking into your house'. If you see a cradle, it is confidently predicted that 'You will become a Baptist'.

Because there is a strong element of personal interpretation at work, both in the making sense of the predictions and in the finding of the shadows, Bleigießen makes for a superior method of fortune telling, along with dream reading and tarot. I am unable to back up this assertion with scientific proof, as unfortunately I can't remember what last year's shadows were shaped like, or what the predictions turned out to be. Accordingly, I am making a record of this year's Bleigießen predictions here, to test their accuracy. Revisit the blog in twelve months' time for the results.

I used three pieces of lead, in the shape of a bell, a pig and a crown. On being poured into the cold water, No 1, the melted-down bell, split into two pieces, which I interpreted as representing two facets of the same destiny. 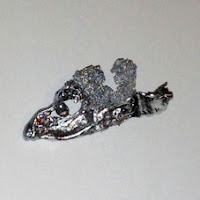 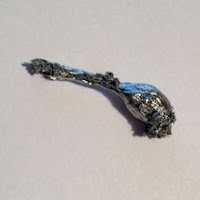 1a, viewed from one angle under torch light, gave a shadow that looked like two people on a boat or gondola, which predicts a long journey. From another angle, I think it looked like either a parrot, which means 'short fickle luck', or a goose taking flight. The goose means 'love bears fruit'. 1b was the smaller piece, resembling nothing more than a twig. Fortunately, 'twig' appears in the accompanying booklet. Its interpretation seems to contradict that of the parrot in 1a, as it signifies 'faithful luck', whatever that means. 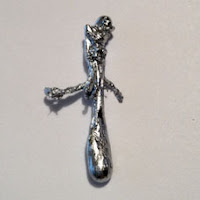 No 2, the pig, produced this unusual shape, whose shadow seemed to me like a marching soldier. I couldn't find an interpretation for this in any of the Bleigießen literature (I will keep searching). From another angle, however, I was able to turn the molten lead into a laughing dog puppet with flappy ears and a big jaw that went up and down. Although the booklet doesn't offer a prediction specifically for 'laughing puppet dog', under the general heading 'dog' it says 'unbelievable news'. 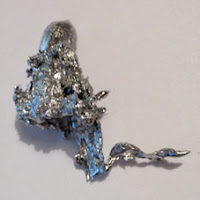 The crown, No 3, turned into this magnificent complex shape. Again, when I held it from different corners, and at different angles, it offered up a wealth of interpretative possibilities. Most obviously, it was a long-nosed animal – an aardvark, dromedary or kangaroo – for which I looked under 'camel', and read that this meant 'new duties', doubtless relating to my job. From a slightly different angle, the nose became a beak, and the shadow took on the shape of a dodo or pelican. The pelican shape means, apparently, that I will bring something to a successful completion, possibly an restatement of the goose in 1a. Holding the lead from the opposite corner, I was able to discern a monkey, which, according to slight variations in the angle, appeared to be engaged in a series of sophisticated activities: fishing, reading a book, hailing a taxi. Again, the flimsy booklet didn't have an entry for 'sophisticated monkey', but under 'monkey' it said 'be cautious about being tricked'.

There we have it. My Bleigießen predictions for 2012. New duties, a long journey (I would very much like to visit Toronto this year) relating to luck of a flighty/faithful nature, or unbelievable news. Perhaps I shall be fortunate enough to avoid being tricked. Without doubt, however, the most startling and unlikely prediction is that I will successfully complete something. This runs counter to my normal way of doing things. In fact, my reputation for leaving projects unfinished is so well established that, if by some strange chance I should successfully complete something by the end of the year, that alone would constitute irrefutable proof of the amazing predictive powers of the Bleigießen.

I am keen for the Bleigießen to be proven correct. I'd better get started.
Posted by Michael Brunström at 18:39 0 comments