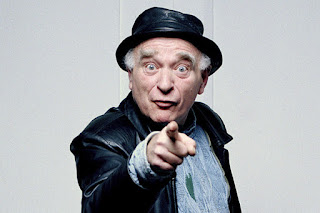 Went to see Terry Johnson's KEN at the Hampstead Theatre. In such a grand environment, I half expected a watered-down collection of pleasant theatrical reminiscences and anecdotes. On principle, I don't like anecdotes. (Or jokes, for that matter.) Anecdotes (and jokes) are what we reach for when we would rather say something meaningful, but are too afraid.

There were plenty of knowing references for Tentringer enthusiasts, of course – which elicited appropriate chuckles from the cognoscenti – but the play itself was shockingly eye-opening, giving an authentic insight into what it was like to experience the early days of The Warp and the failures of the Rainbow Theatre Hitchhiker's Guide. But, more importantly, it was a play about what it was like to have Ken Campbell in your life. And the script bubbled and shone with genuine poetry.

Jeremy Stockwell embodied Ken better than I've ever seen attempted before. He picked up on microscopic mannerisms that we hadn't even noticed before, leaving us ever so slightly spooked. In the bar afterwards, Jeremy declared, 'We all have our own Ken', which is true. Mine tends not to be the nasal, opinionated practitioner that some have found, but rather the childlike, whimsical supposer. These are two sides of Ken's enantiodromia. But possibly the most astonishing moments that Stockwell and Johnson found, I thought, went beyond that simplistic dichotomy, to when Ken went quiet, impassive, with nothing to say, observing and absorbing. That, I discovered, was Ken at his most potent.

Watching KEN is inspiring, not like a shot in the arm, but like a poke in the chest. Yet again, goddamnyou, I'm forced to answer (not half-assed pretend to answer): 'What are you doing?'
Posted by Michael Brunström at 01:26 0 comments