After my dad retired, he got into the habit of writing letters to his relations and friends, which he kept up for most of the 1990s and early 2000s. They were surreal, funny and occasionally brilliant. Some form an imaginary set of 'Practical Guides', while others chronicle a series of adventures with recurrent characters. By and large, they deal comically with his experiences as a 'senior citizen' coming up against an increasingly unfamiliar world. He satirizes modern pop psychology, New Age mumbo jumbo, corporate-speak and bureaucracy. He also caricatures himself as antagonistic, pedantic, insecure and meddlesome. They form a honest yet sly self-portrait.

People often suggested that he should have them published, either as a little collection of comic essays or as a regular column in some magazine or other. But for one reason or another, Dad was reluctant to do so. Perhaps it's just as well, as it's hard to imagine what sort of audience there would be for this sort of material. Not everyone 'got' Dad's humour. Many of the letters are politically incorrect, and his satirical portrayal of women is particularly barbed, but there is no malevolence or prejudice. Above all, Dad liked instigating arguments, so any provocative sentiments must be understood as part of a mischievous, Liverpudlian irony. It helps if you imagine them being read out in his lilting voice, which alternated between a clownish, mocking faux-grandeur, and an earthy bathetic drawl. Sadly, we no longer have his voice, but the letters remain.

Although Dad never published the letters, he was generous at distributing them, so I have no qualms about sharing them now. They are not in any way private. If you wanted to be added to his mailing list, you only had to ask. As each installment was completed, he would fill your name at the top of the letter and post you your very own copy. At the height of his output, Dad would send out a dozen copies of each letter at a time. Essentially, Dad was a blogger, though the word didn't exist back then. (He made a few attempts to get the hang of using the Internet, but it evolved faster than he could grasp its intricacies, and the overwhelming weight of rubbish it contains taxed his patience.)

With the idea of a blog in mind, I dug out a folder full of these letters from Dad's filing cabinet. In his inimitable handwriting, there were some scrawled attempts to number and organize the letters, on scraps of paper and Post-It notes. The dating of the letters is in most cases impossible to determine or rationalize, as he would put the current date on any letter he sent, regardless of whether he had written it years previously. My aim in transcribing them is to tidy up the lapses in spelling, grammar and syntax (faults he would leap on and hold jubilantly up to ridicule if he found them in anyone else's writing), but I will otherwise leave them exactly as he wrote them, including his occasionally eccentric layout and punctuation.

Some of the letters are duplicates or contain repeated material, and I will be asking those of his readers who were more careful in keeping these treasures safe them to supply me with copies of the many missing ones. When I've completed editing and posting the (approximately) fifty comic letters, I may add other bits of Conradiana. There are writings on economics and on philosophy, tongue-in-cheek letters to the Ealing Gazette and angry ripostes to the Guardian.

Accordingly, I'd like to invite you firstly to get a yourself a drink, and then to enjoy the inaugural post on a new website – www.lettersfromconrad.co.uk – a curiously high-tech memorial to my dad. I have tried to keep it as simple as possible. 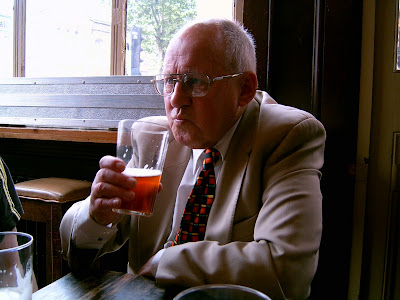 Posted by Michael Brunström at 11:52 0 comments

I’m busy these days. After a relatively inactive bit of my life between last year’s and this year’s Edinburgh Festivals, I’ve suddenly got a lot of projects on the go – some of which I initiated myself; others of which have unaccountably come hurtling in my direction. I like being busy. If I weren’t busy, I’d be lazy, which is another way of saying I’m bad at organizing my time. One of my hypocrisies is that I admire people who manage to cram lots into their day, but I very seldom get annoyed with myself when I fail to get things done. Sleep is as good a waste of time as any other, and I enjoy that – but I’ve even gone so far as to congratulate myself when I’ve succeeded in pissing away an entire weekend in front of the telly.

The only time I get frustrated with myself is when I don’t have enough energy to do everything I want to do. Occasionally it’s occurred to me that I should take more exercise, eat more healthily, drink less, in order to raise my energy levels generally. But you and I both know that’s not going to happen. The fact is this: you always find energy to do the things you enjoy the most, just as your stomach always finds room for dessert after a heavy meal. My annoyance at myself for feeling tired is far more to do with the fact that it means I’ve been doing the wrong things. Uninspiring jobs, even the simplest ones that don’t require any effort, leave me exhausted. By contrast, give me a good film to watch, or an impro show that dares to express its own uniqueness, and I begin bouncing around and talking too fast, even though I’ve just been sat in my chair for an hour and a half. I don't need bags of excess energy in order to enjoy a good rehearsal or improvabout.

What about the sedentary activity of writing? Does writing energise me? Not always. But by thinking about it in terms of energy levels, I have learned that there are two types of writing. Most of what I write, on this blog, or in my Diary, in the White Notebooks, or elsewhere, is about stuff. The stuff happens, or I think it, and then I see it as a useful duty to write it all up, to fix it in place. I put off this kind of writing. I fall behind in it, then have to put extra time aside to catch up on it, which I resent, because it prevents me from doing the things and thinking the stuff I like best. This kind of writing wears me out, and becomes tedious. But every so often, once I get started with pen or keyboard, once I overcome the sense of it being a chore, the fear of the blank page and the chains of purpose and meaning, writing becomes active. The task of keeping a record gives way to the creative business of making stories. And I speak here of the microscopic dramas that play out within the syntax and semantics of a sentence as well as the big narratives that I vainly seek to impose upon my prose (behaving as if I were the author of language itself rather than a bit-part actor making the most of the few brief lines I have be assigned). Writing can and should be an activity, not a passivity, one that’s as energizing and as delightfully purposeless as swimming. What matters is not what gets written and what doesn’t, but freedom, wonder and involvement.

I should definitely try to put more time aside for swimming. But when? I'm so busy. Yawn.
Posted by Michael Brunström at 18:02 0 comments