In 2015, I performed a show called The Golden Age of Steam six times at the Edinburgh Fringe and won the ‘increasingly prestigious’ Malcolm Hardee Award for Comic Originality. Off the back of the ballyhoo surrounding that announcement, I had comedy promoters get in touch with me. They were keen to have me on, because they assumed I must be good because I’d won an award. The Malcolm Hardee Award isn’t an award for being good, however. It’s just for being weird. I will never forget the looks of disappointment on the faces of the promoters who booked me after I came off stage.

A few people liked The Golden Age of Steam a lot, but most people didn’t. A good chunk of each of those six audiences walked out before the end, and one review complained that the show was meaningless.

I’m not one of those comedians who delight in boring or upsetting their audiences. People walking out isn't a good thing. I don’t think I’m ahead of my time, or a misunderstood genius. I don’t even think I’m very original. If you’ve seen my act, you may find this hard to believe, but I’m actually trying to be as good as I can be. My job is to entertain whoever comes to see me, and to do this by being as fully true to myself as possible.

So I didn’t take the criticism of my ‘meaningless’ show to heart, but I did take it seriously. To me, The Golden Age of Steam wasn’t meaningless at all, but I hadn’t made much effort to convey that meaning. Hardly anyone ‘got’ it. I’ve only ever met one person who ‘got’ it completely. (If you think it’s you, it probably isn’t.) There’s a thin line between being wilfully, ironically obscure and just being sloppy and lazy; I wasn’t completely sure what side of that line I was.

The first thing I decided about my 2016 show was that it would be easy to understand. At no point, I decided, would the audience not know what was going on. Was it possible to cram my loose and lazy creativity into a straightjacket of comprehensibility? The challenge of the show was to answer that question. 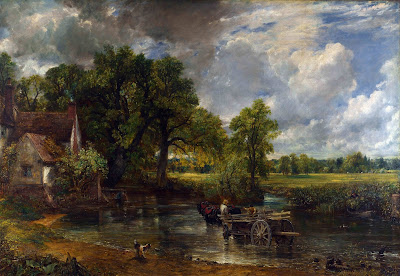 The second thing I decided was that the show would be about a painting: a strong, instantly recognisable image that the audience could cling on to. It would anchor and structure the show in such a way as to allow flights of fancy. I chose John Constable’s The Hay Wain because the idea of a comedy show about The Hay Wain made me laugh hard. The Hay Wain Reloaded began life as a collection of three sketches bookended with bits from Constable himself. The structure could hardly have been more banal: opening remarks; Noel Edmonds is a cello; Mary Quant was a whaler; Anita Dobson is weird and fucked-up; finale. It was almost insultingly foolproof.

If you visit Willy Lott’s Cottage on the River Stour (on the border between Suffolk and Essex), and stand at the spot where The Hay Wain was painted in 1821, the first thing you will notice is the enormous red brick building to your right. Initially, you assume that it’s a modern intrusion into Constable’s quiet landscape, but actually that’s Flatford Mill, which was owned by Constable’s family. Young John used to help out there when he was a child. But he decided not to put it in his painting. You can see hints of it, at the far right-hand side of the canvas, but that’s all.

As I previewed my foolproof Edinburgh show, I read more about John Constable’s life and his fraught relationship with his wealthy father, who didn’t always support his career choice as a struggling artist. It began to make sense that his father’s mill should be most conspicuous by its absence from his most famous painting. Themes about difficult paternal relationships and difficult career choices started to seep into my silly sketches. Noel Edmonds had a father who said he could never be a TV presenter. Mary Quant had a father-figure who led her into a new career. Anita Dobson was… well, still weird and fucked-up, but it turned into an opportunity to stop the show and talk about my father, thus breaking up the dismal three-act structure that bored me so much.

It turned out that The Hay Wain Reloaded had always been more about myself than I had cared to admit. (Anita Dobson turned out to be the key to the whole thing.) Because it was suddenly clear: I was John Constable, the disappointing son to an ambitious, but emotionally detached father. I’d have a photograph of my dad on stage, peering over my shoulder the whole time, and I’d acknowledge its presence only at the end of the show. My dad never saw me perform comedy; he died five years before The Hay Wain Reloaded. And Golding Constable never saw his son’s success; he had died five years before The Hay Wain in 1816, or exactly 200 years before The Hay Wain Reloaded. Then I remembered that before I was born my dad once lived in a cottage next to a quiet stretch river, on the border between two counties. That was my Edinburgh show: it had a clear structure; the marketing possibilities seemed limitless – think of all those jigsaws and tea towels! – and it was about my Dead Dad. Perfect.

I approached Edinburgh 2016 all wrong. I was so pleased with my show that I expected it to be a hit. The reviews were good. One of them seemed to ‘get’ it. The same reviewer who had complained about The Golden Age of Steam was meaningless enthusiastically said how much better this one was (thought it isn’t clear if they ‘got’ it.). But people didn’t come. I was performing to three or four people, plus my friends. One show was cancelled because no one showed up. It was frustrating. But all the while I heard rumblings; I started hearing that people liked my show a lot; I heard that people were talking about it – national press, so-and-so, Mr and Mrs Important. It was all very exciting.

Everyone waited until the final show of the run to come to see it. I crammed the room to bursting and gave an untidy, sweaty, hoarse performance to rapturous applause. After that I packed up the show thinking that I had created something very good indeed, and that I had almost but not quite made a big splash in Edinburgh.

I immediately started promoting the post-Edinburgh show, sending out lots of lovely press quotes. In response, I got several invitations to perform The Hay Wain Reloaded at theatres and festivals, but one by one they all fell through. Absolutely nothing came of my efforts. The show was over. Eventually I put it on myself at a loss for a few friends at the Museum of Comedy. It was a slightly sad end and I felt bitter and hard-done-by. I wanted to blame somebody, but there was no one to blame but myself.

I had fucked up. I had started to listen to the echo-chamber of my own bubble of friends. I had started to believe I was brilliant. I was starting to actually believe all the ballyhoo written and said about myself. I was exactly like those promoters who booked me after I’d won the Malcolm Hardee Award. I’d done nothing except set myself up for massive disappointment.

So what next? I have a little show called Parsley, which amuses me a lot. I’m not going to tell you about it. Is it as good as The Hay Wain Reloaded? It’s too early to say, but who cares anyway? It will be as good as I can make it. But I’ve had it with ballyhoo. My goal and challenge for Edinburgh 2017 is to have fun instead.
Posted by Michael Brunström at 11:40 0 comments