While some popular personalities have an evergreen appeal, others, after they have peaked and become unfashionable, make a comeback in more or less an ironic version of themselves. David Hasselhoff. William Shatner. Matt LeBlanc. (The excesses of the latter Elvis or Liberace represent another version of this phenomenon.)

What is becoming more common these days, however, is for the order to be reversed, and for the spoof to precede the "genuine" article. One of the earliest examples of this was Mr Blobby, a spoof TV children's character who was created in the 1990s for a series of pranks against gullible celebrities on Noel's House Party, but later exploited as a marketable character in his own right.

The deliberately awful Christmas singles, not to mention the toys and other merchandising, were duly churned out, and Mr Blobby was accused by some of being lowbrow. But these critics were easily silenced by being reminded that Blobby's original purpose was to mock those who took him seriously. The creators of Blobby, meanwhile, kept their investment safe behind a mask of irony, never openly declaring their creation a hoax so long as there was money to be made. Thus, Mr Blobby and his detractors were caught in a futile loop, neither wishing to declare openly that the emperor had no clothes (or rather that Mr Blobby was merely an outfit without any content).

Chris Morris' single-series sitcom Nathan Barley was all about the madness that ensues from the inability to take anything seriously for fear of missing out on a presumed joke that no one had any authorship of. The mantra "shit is good" neatly summed up the shatterproof paradox that drives its unlikable hero Dan Ashcroft insane. Nathan Barley gets better on second and third viewings, because the quality of the acting gets lost the first time behind all the noise and visuals and ideas. Nicholas Burns brilliantly portrays Barley as a protean antihero, clearly terrified by his own ignorance, yet destined to win out in the end. All he knows is that any moral compass will be more a hinderance than a help in the creative tundra of Shoreditch.

If, like me, you are determined not to take yourself too seriously, and to eliminate stultifying po-faced earnestness from your creative endeavours, you will also want to avoid the opposite trap: wallowing in a Barley/Blobby swamp of lazy irony. It is crucial to appreciate that our authorial intentions are as flimsy and negotiable as the interpretations others may make of them. But the irony game of one-upmanship with our audience is an unworthy distraction, and it is only by sacrificing any claim to a privileged position as artist, and instead engaging in a collaborative co-creative process with the public, that anything of any value can be made. Selflessness is the key.

Both Mr Blobby and Nathan Barley represent the selfish implosion of creativity brought about by an ironic standpoint. The contrast between them is that Blobby cynically and knowingly exploits other people's weakness and gullibility, whereas Barley is a lazy and ignorant idiot, barely conscious of the content vacuum in which he operates. The fact that one is self-aware and the other is not makes no difference, however: they should both stand – as twin lighthouses – to warn us of the perils of sailing up our own arseholes. 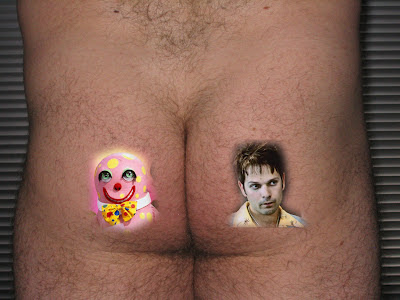 Posted by Michael Brunström at 16:34 0 comments

I have had it in mind for some time to write on the subject of SHOUTING. But I’ve kept putting it off, partly because it’s not a pleasant topic (and we like to keep things nice here at Tingtinglongtingtingfala) and partly because I was not sure what tone to take to avoid the slightest dab of hypocrisy. The reason is this: I’ve been accused of SHOUTING on stage. Nerves, undoubtedly. And nerves also cause me to be inaudibly quiet on other occasions. This upsets me enough to want to train my voice, as there are few things I hate more than SHOUTING.

My boaphobia undoubtedly dates back to my childhood. The transition from the normal hurly burly of living in a house full of boys to my Dad’s aggressive, often drunk, SHOUTING was a subtle one. To this day, the SHOUT I fear the most is the one that seems to come from nowhere, that gets you in the back of the knee. It signals that communication has broken down. Listening has gone. As soon as that SHOUT is out, it cannot be put back in its box. From that point on, there is no hope.

There is never any need to SHOUT on stage, and this is especially true in improvisation. It is because I fear SHOUTING so much that I have such an exaggerated delight for voices that can be reassuringly big, that can fill great spaces without either force or amplification. (And it always surprises me that modern comedians inevitably rely on microphones to fill spaces that their music hall forebears filled unaided.)

In online communication, the use of CAPITALS often denotes SHOUTING, but here the distinction is even more subtle than that between SHOUTING, lively loudness and good projection, so care is needed. Increasingly, we use text in the same informal and conversational context that we once only used our voices. When we write a Tweet, or a comment on a Facebook post, our thoughts are instantaneously broadcast. Once published, they fill the space they are projected into, and we ourselves have the satisfaction of being the very first person to read them. The dialogue we are engaged in may idiomatically resemble a normal, friendly spoken one, but the same mechanisms of listening and attention that aid face-to-face communication are not yet fully developed in the virtual world. Even without the use of capital letters, the average Twitter feed often resembles a series of megaphone announcements, and a thread of Facebook comments a barrage of non sequiturs. It is possible to be engaged in numerous conversations all at once, to comment on everything that pops up, and to see your own voice (and an image of your own face) repeated endlessly in front of you. It is so easy to seek to generate a greater online presence at the expense of listening. I love social networking sites, but I try to remember that they have poor acoustics, and that all my words risk becoming noisy, SHOUTY echoes.

It is good to express your emotional and intellectual reactions to things in a spontaneous, uninhibited and courageous manner. But for exactly the same reasons that I need to train my voice so I don’t SHOUT when I’m on stage, it is necessary to be a sympathetic and sensitive microblogger.
Posted by Michael Brunström at 13:36 0 comments