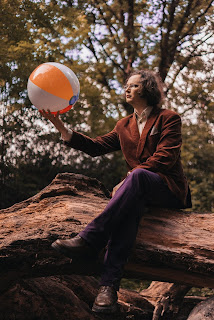 Twenty sixteen has been a strange and busy year, creatively. After I won an award in 2015, I felt as if I had the wind in my sails. I abruptly got a few higher-profile-than-usual gigs, such as Pull the Other One and Knock2Bag, on line-ups that included people like Simon Munnery and Kevin Eldon.

I already had most of the elements of The Hay Wain Reloaded in place right at the start of the year. So I was able to preview it in January, although at that stage I didn't have a clear idea of what the show was trying to do, and I anticipated major rewrites. The process over the course of the year turned out to be one of working out why those elements had been there from the outset. When I discovered what the show actually meant to me personally, it was a thrilling experience.

So pleased was I with myself and The Hay Wain Reloaded, I fell into the trap of believing that it was entitled to popular success, and while it slowly built its audience of keen seekers in Edinburgh before the short run ended, it never attracted as many people as my previous shows did. I made numerous attempts to keep the show going in the second half of the year, but they all either came to nothing or fell through. I had to be content with putting the show on myself (at a financial loss) for two nights at The Museum of Comedy. I can't be bitter, though. The Hay Wain Reloaded was so much better than anything else I've done, and it will be a tough thing to follow.

Although collaboration with others doesn't always come naturally to me, there were a handful of new and unusual joint projects that made this year special. It's always a pleasure to work alongside energetic, brilliant and lovely people. Among them there was 'Double Act' (a short film), 'Jalapeño High' and 'A Load of Croc' (a couple of mini-series with the Weirdos) and of course the Weirdos Panto. My New Year's Resolution is to attempt more collaborations and to instigate one or two myself.

I absolutely loved the one-off gigs. For example, 'Simpsons Night', when we recreated two episodes as faithfully as possible, creating something entirely original in the process; Hallowe'en, when I put in an appearance as 'The Upside Down'; and 'Eurovision Night', when, representing Macedonia, I belted out the rousing patriotic anthem:


Stand up,
Stand up,
And help me find my house keys.

Perhaps it's my background in improv, but the one-offs are altogether my favourite gigs. They might not be the most polished or well-constructed performances, but they give the audience, and myself, that beautiful sensation of having a unique, never-to-be-repeated experience. This feeling is one that I want to share with every audience, whether I'm performing a bit for the first time or the hundredth. Another Resolution: approach more gigs as one-offs.

It seems I'm heading into 2017 with less momentum than I had at the start of 2016. But I do have a rough idea for a new show, Parsley. I don't really know what will be in it, the way I did with The Hay Wain Reloaded – certainly no actual jokes, or stories, or sketches or characters – but rather a feeling I want to evoke, and the confidence that if I pursue it relentlessly, something will emerge. I look forward to finding out what it is. The word 'comedy' seems increasingly inappropriate, though the alternative comedy scene does provide a suitable stage for my hard-to-market Low Art strangeness.

THANK YOU
Posted by Michael Brunström at 12:04 0 comments