I promised myself I wouldn't write about improvisation on this blog. This is the third consecutive Tingtinglongtingtingfala post to mention the "I" word. Never apologize. Commit to your decisions. If you're going to break your promises, use a sledge hammer.

But, following the "rule of three", it's time to move on. I need to take a break. I need a holiday. I need Alps. Am I tired? I don't feel tired. I ought to. That's the problem.

The other day I was watching an unusual improv show. Midway through, I spotted a fellow improviser in the audience – someone of unquestionable talent – exhibiting a face that was twisted into a clear sneer of disapproval.

I became distracted from the show, and found myself focussing on that ideological sneer. It depressed and outraged me. We need improvisers who are generous and humble, not superior and snobbish. Heaven knows my limited accomplishments give me reason enough to be humble.

But how wrong was I? It was I who was passing judgment, who wasn't giving the show my full attention. I'd crassly allowed the sneer to infect my face. Ego creeps up on me, even when I tell myself I'm defending a principle. It blinds and deafens me.

When the opinions of others matter too much, when it becomes too easy to categorize fellow performers, when improv theory outweighs playfulness, then it's time to escape to the Alps. I'm off in mid-July for a fortnight, to listen to windy forests and cowbells. Two weeks without improv will make me a better improviser.
Posted by Michael Brunström at 15:41 0 comments

Is Improvisation an Art Form?

Is improvisation an art form? I will attempt to answer this using logic. I don't know very much about logic. I'd love to be able to tell you what this is: 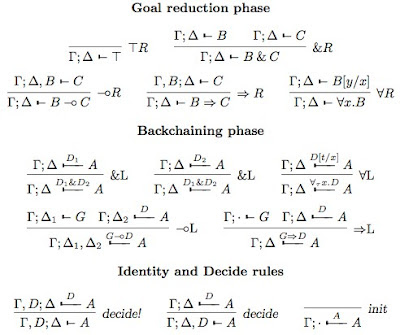 But I have no idea.

When someone tells you that x is y, this is may appear to be a very straightforward assertion. But it's actually complex and ambiguous, and the conclusions we draw will always depend on a successful understanding between the speaker and the listener. We have to agree on whether a) we're being asked to change or develop our definition of x in the light of a pre-agreed concept y, or b) We all know what x is, and we are being asked to amend our definition of y.

Propositions that are tautological, irrefutably true or self-evident – such as "Virtue is good" or "Too much fruit is bad for you" – don't mean anything at all. They are too true to carry meaning. And if I say "San José is the capital of Costa Rica". This statement is only meaningful if you either don't know where San José is or if you don't know what the capital of Costa Rica is. If we already know both these things, or neither of them, the utterance becomes a worthless. A statement is only meaningful insofar as its truth is debatable or its logic ambiguous.

According to this definition, it is certainly meaningful to ask whether improvisation is an art form. We can agree either that

"Improvisation is more than just a bunch of idiots clowning about in a pub. It should be taken seriously. It can be the equivalent of high drama, great painting and literature."


depending on what you want to believe.

The meaning of these statements don't exist in their truthfulness, but in the dissonance between the x and the y terms. By taking almost any two loosely defined concepts from a pair of columns, even a machine can create propositions that crackle with ambiguity, and can be asserted as "meaningful", even "inspired".

In the interests of full disclosure – or lack of it – I should add that my proposition "Meaningful statements are ambiguous" is itself an assertion of the "x is y" type. Am I asking you to guess whether the target of my logical satire is "ambiguity" or "meaning"? There exists a third option: I have no idea, and I am deliberately hedging my bets in order to appear clever. This is what most people do every time they open their mouths.
Posted by Michael Brunström at 18:07 0 comments