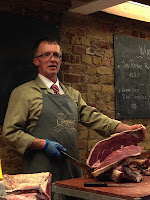 The other night, Dani and I visited Greensmiths on Lower Marsh, where the resident Master Butcher from the Ginger Pig, Martin Kavanagh, was giving a demonstration of meat preparation. Using a collection of impressively sharp knives, cleavers and saws, he took apart a 50-day-aged side of beef. He extracted the fillet and topside, removed the spine and ribs, and took the rump apart, skilfully removing as much fat as possible. The bones cracked noisily and the air filled with a pungent meat aroma, and the small audience's eyes watered as though they were watching an autopsy. Afterwards, a rare côte de boeuf was carved and served up with carrots, broccoli and potatoes dauphinois. 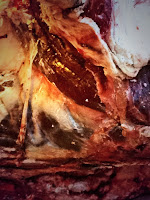 Martin is a skilled craftsman, but also a performer and a engaging communicator. He does his work in the shop window facing street precisely to attract curiosity, because his job is as much about people as it is about animals. He explained how important it was that people ask questions about meat and engage with the topic. (He confessed that the recent horse-meat-in-lasagna scandal had been good for business, as more customers wanted to ask about the origin of their food. The more he could tell them, the more they were interested,)

Like a great artist, he has developed over the years a skill, a profound knowledge of his subject and a distinctive personal style. What makes him different from many "proper" artists is his dedication to sharing his experience as transparently as possible. Rather than mystifying his art, as some writers and performers do, and talking in deliberately ambiguous terms that leave you wondering by what superhuman magic how he does what he does, Martin feels – without any false pride – that to be as direct and honest as possible with the public is an integral part of his job. He trims the fat from both the beef and his speech. And that's a pretty good way to go about your work, isn't it? 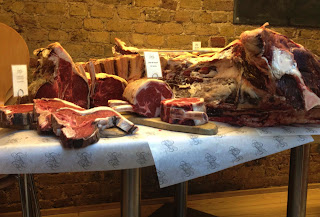 Posted by Michael Brunström at 08:43 0 comments