A good shortform impro game would involve one actor attempting to negotiate a horrendously complex situation armed only with gibberish and whatever phrases could be gleaned from a slender tourist's phrasebook.
Eugene Ionesco's early play La cantatrice chauve (The Bald Prima Donna) was inspired by his experiences learning English according to the Assimil method, using a book called L'Anglais sans Peine. In the early stages of the language course, an English couple is introduced – the Smiths – who talk to each other in stilted phrases, pointing out facts that should have been blindingly obvious to both of them. Ionesco described the process in an article he wrote in 1958:

To my astonishment, Mrs Smith informed her husband that they had several children, that they lived in the vicinity of London, that their name was Smith, that Mr Smith was a clerk, that they had a servant, Mary – English, like themselves. . . . I should like to point out the irrefutable, perfectly axiomatic character of Mrs Smith's assertions, as well as the entirely Cartesian manner of the author of my English primer; for what was truly remarkable about it was its eminently methodical procedure in its quest for truth. In the fifth lesson, the Smiths' friends the Martins arrive; the four of them begin to chat and, starting from basic axioms, they build more complex truths: 'The country is quieter than the big city . . .'

La cantatrice chauve, an 'anti-play' in which the Smiths and the Martins appear, begins as a satire on language as it is taught, then expands logically to be a satire on the whole of language. The rules, conventions and narratives that are inherent in language lead inexorably to its own decomposition into an incoherent babble. This is what makes the play a tragedy.

I once had the idea of taking the idea in a different direction by assembling some sketches that consisted solely of the expressions found in a opening pages of a Greek phrasebook, spoken unedited, verbatim and in order. The only additions I would make would be a series of stage directions, which would lend nuance, purpose and drama to an otherwise dreary list of expressions to use when, for example, ordering a taxi. It would resemble a ballet more than a play, a series of impressionistic vignettes in which the unspoken emotion would eventually triumph over the formalities of polite discourse. The dialogue would begin:

Leading at some point to: 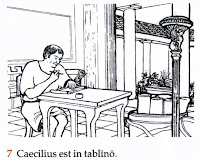 Language textbooks and phrasebooks are a good source for narratives, as they follow a good story-telling principle of starting as simply as possible, describing an environment first, and building solely on what has already been established. The Cambridge Latin Course exemplified this principle. In Book I, Stage One we learn only that Caecilius is in the tablinum, while his wife Metella is in the hortus. Apart from some comic business from the cook Grumio and the dog Cerberus (which attacks people at random), plus a couple of dreary dinner parties, very little happens until Vesuvius erupts in Stage 12. Yet by the end of Book V, enough vocabulary, grammar and syntax has been generated to describe an entire empire, and to sustain an involved plot about the unscrupulous senator Gaius Salvius Liberalis being put on trial accused of the forgery of the will of King Cogidubnus.

The learning of a language is not just similar to the exploration of a world or the narration of a story, it is exactly the same thing. The implicit conventions that emerge from the from the classification of utterances are the exactly same ones that govern the rules of the universe in which those utterances are made. So your choice of teaching material is all-important. If, for example, the actors in my impro game were to use the Korean language iPhone app from Lingopal, instead of your average Berlitz phrasebook, the scene and the characters would inevitably develop along very different lines.

I recommend this app, whether or not you ever find yourself in a situation where you have to express yourself in Korean. For ease of use, the phrases are grouped under 25 different headings for different situations. Here is the full list:


The insults Lingopal recommends are remarkably creative, such as 'Suck my dick and wash my car' (내 좆이나 빨고 내 차나 씻어라) and 'Eat the peanuts out of my shit' (내 똥에서 똥공이나 골라먹어). But flirting expressions alone comprise nearly a third of the phrasebook. Perhaps this genuinely reflects the priorities of the modern young traveller. I can only assume that there is indeed some evidence that it is possible to seduce someone by reading lines directly from your iPhone in an uncomprehending syllable-by-syllable phonetic drone. Even if it isn't, the suggested phrases are eye-opening and instructive. They range from the cheesily tame – 'You are very pretty' (당신은 매우 예뻐요) and 'Can you recommend a restaurant I can take you to?' (당신을 모시고 갈 레스토랑을 추천해 주시겠어요?) – via the adventurous – 'It's unusual, but since I met you, my trousers feel tighter' (이런적 없지만 당신을 만난 후로 제 바지가 꽉끼네요) – through to lines that are so irresistibly surreal that I can well imagine Ionesco himself finding success with them: 'I have forgotten to do my homework, Mr Submarine Commander!' (숙제 하는걸 잊었어요 잠수함장님!)
Posted by Michael Brunström at 16:39