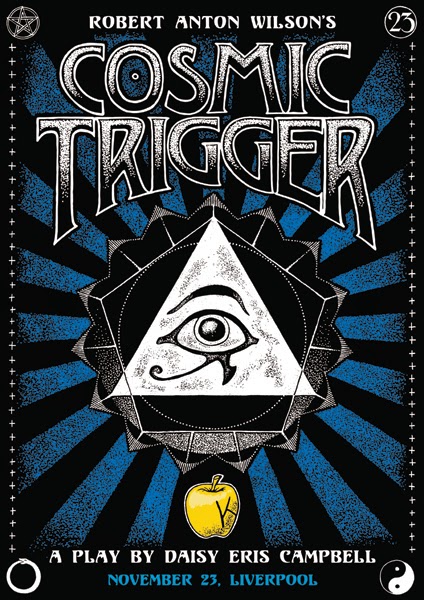 Cosmic Trigger is a play about ideas, by which I mean that it makes ideas sensational. It would be easy to create an adaptation of Robert Anton Wilson's book consisting of nothing but a succession of wordy philosophical and speculative conversations, punctuated by "events". What Daisy Eris Campbell's play compellingly demonstrates – through its synchronistic structure, by its enthusiastic individual performances and in the sheer pottiness of the project as a whole – is that the ideas we entertain are indistinguishable from the physical world that our brains create. Events and ideas are one and the same.

In other words, to live in the most liberated way possible, we are obliged to suppose everything. This involves embracing contradictory realities simultaneously, while becoming a prisoner of none. The three principal characters – Robert Anton Wilson, Kerry Thornton and Timothy Leary – each attempt to live in this idealistic Discordian paradise, but with varying degrees of success. Oliver Senton (with whom Kate Alderton should be mentioned in the same breath), Lee Ravitz and Andrew MacBean provide a human scale to these larger-than-life characters engaged on this journey.

To reflect the multiplicity of realities colliding with each other on and off stage, Cosmic Trigger employs a very broad range of theatrical moods. There is pantomime, cabaret and caper. There is a cheesy musical number (a explanation of the eight-circuit model of consciousness). There is both camp farce and good sex. There are spectacular costumes, sets and set pieces. There is also tragedy, expressed minimally through unadorned monologue in a single spotlight. Many of the most memorable moments come when the mood changes abruptly, such as Josh Darcy's explosive entrance as Ken Campbell, or the poignant scene in which Bob and Arlen's daft party is suddenly interrupted by horrifying news. The finale of the four-hour show is joyful, yet without being tritely upbeat.

Throughout the play, the audience is treated to the joy of multiple worlds whooshing into existence. The happy energy of Wilson and Thornley, as they plan out Operation Mindfuck in Act One, infects the whole experience of watching it. We discover that the whole show (on and off stage) is a joke, a deep joke that we can choose to struggle with or go along with. Although the clever fourth-wall stuff offers regular reminders that reality is on the rocks, it is Eris, in the end, who completely capsizes the production. Whenever Claudia Boulton materialises, there is the genuine thrill of danger that only accompanies the best improvised mayhem.

Dave, who couldn't be there, texted me afterwards, asking me to sum up the experience in a sound. The only thing I could think to reply was: "Zeus's orgasm". I wonder if Eris will forgive me, for using her [supposed] father's ejaculation as the ultimate metaphor for something as vast, ridiculous and fertile as Cosmic Trigger.
Posted by Michael Brunström at 16:53